Community Justice Project alumna Jules Porter, was interviewed by Starting Up North about how she actualized her passions for advocacy and video games by starting her own video game company, Seraph 7 Studios.

10 NAACP Women You Should Know About

Community Justice Project student Leslie Redmond, 3L, testified before a legislative committee in support of a bill to limit probation sentences--read more to learn about what the bill entails.

ChangeMakers: Justice Alan Page and Paris Yarbrough, a legal legend and the next generation 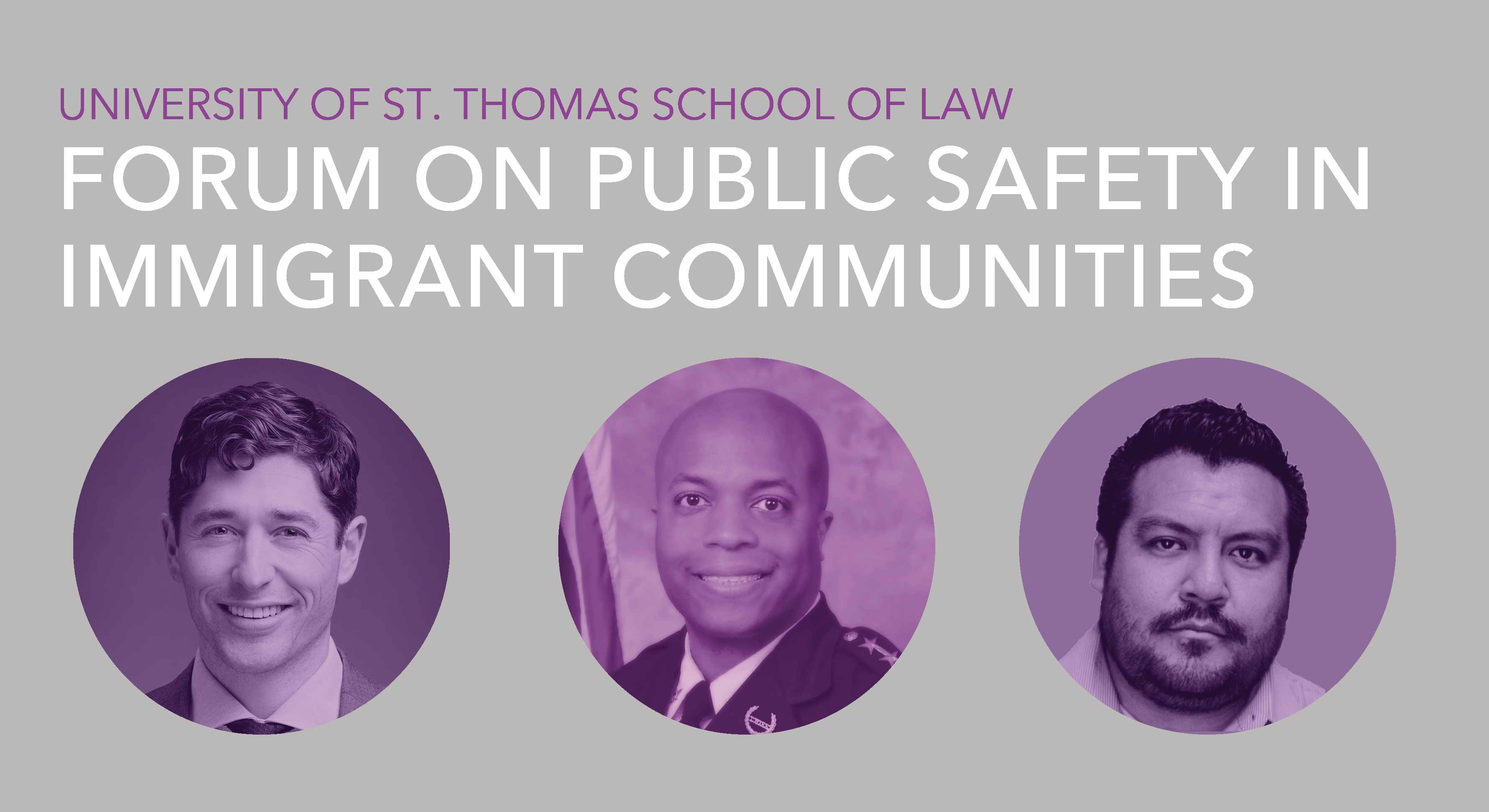 March 28, 2018
Join us for a candid conversation to understand other perspectives, generate winning ideas, and promote community engagement.
Read More

Community Justice Project Fellow Carmeann Foster was presented with the Rising Star Award on September 23.  The Award honors young alumnae/i making a difference in their professions, communities and families. They demonstrate excellence in leadership and service to others, and play an influential role in family, profession, community, church or volunteer activities.

During his time at St. Thomas, Huffman participated in the Community Justice Project and worked for the Minneapolis City Attorney, where he spent time in the office’s civil and criminal divisions. He wrote for and edited the Journal of Law and Public Policy and earned his master’s in public policy before his legal education was complete. His courses, such as Advanced Legal Research and Trial Advocacy, helped him “hit the ground running” in his legal career, he said. Legal analysis was a “180-degree change” from the way he was trained to think as a corporate communications major. At St. Thomas, he acquired the “lawyer way to think” about issues he would encounter at work and in the world around him.

Something Is Rotten in the State of Minnesota | Politico Magazine

In Levy-Pound’s perspective, it is a relative lack of investment, not segregation, that pushes black Minnesotans so far away from achieving equality. “If we had access to the proper resources, African-Americans could have thriving enclaves within the Twin Cities community,” Levy-Pounds said.

"We trust our government, at least we're supposed to, to be able to hire these people who are supposed to protect and serve us and when they kill one of us without just cause, there should be accountability," Minneapolis NAACP President Nekima Levy-Pounds told the protesters. "People should not be executed, shot at point blank range and we're told that it's OK."

Levy-Pounds is a human magnet. Folks were coming by to speak to her or waving at her to come over all during our hourlong chat Tuesday at the Golden Thyme coffee shop on Selby Avenue in St. Paul. The soon-to-be-40-year-old mother of five, law professor, civil rights attorney and activist is also a magnet for controversy, depending on your stance.

As the most visible and outspoken member of the Black Lives Matter movement in the Twin Cities, she has led high-profile protests and demonstrations in the wake of the Nov. 15 shooting death of Jamar Clark during an encounter with two Minneapolis police officers. The officers reported that Clark, who was unarmed, was shot when he grabbed for an officer’s holstered weapon after he was taken to the ground. The shooting sparked 18 days of demonstrations outside the 4th police precinct police in North Minneapolis. During that period, police cars and other properties were damaged, and five protesters were shot and wounded, allegedly by suspects accused of being white supremacists. There’s an ongoing federal inquiry into allegations of police brutality during the protests as well as how the city handled it.

Cornish, chairman of the House Public Safety and Crime Prevention Policy and Finance Committee, laid out his advice in a letter to the editor published Wednesday by the Star Tribune.

Among the advice offered was: "Don’t be a thug and lead a life of crime so that you come into frequent contact with police." In another bullet point, he wrote "Don’t flap your jaws when the police arrive. Don’t disobey the requests of the police at the time. If you think you are wrongfully treated, make the complaint later."

He ended his letter by saying: "Here endeth the lesson. No charge."

Nekima Levy-Pounds, president of the Minneapolis NAACP, decried the letter, saying its use of the word "thug" was a coded reference to black men.

"I'm disgusted that one of our state legislators would feel comfortable writing a racially-charged op-ed that reinforces negative stereotypes about African-Americans," she said.

MINNEAPOLIS (WCCO) — The head of the Minneapolis NAACP is reacting strongly to a letter to the editor from a powerful Republican lawmaker.

State Representative Tony Cornish says he is only trying to defend police against unfair attacks, but his letter to the Star Tribune uses words that NAACP President Nekima Levy-Pounds calls “outrageous” and “racist.”

Nekima Levy-Pounds, President of the Minneapolis chapter of the NAACP and a leading figure in the Black Lives Matter movement in the Twin Cities, has announced she's leaving her position as a law professor at the University of St. Thomas to further pursue her "calling as a freedom fighter and advocate for racial and social justice."

Levy-Pounds joined the St. Thomas law faculty in 2003 at the age of 27. There she founded the award-winning civil rights legal clinic Community Justice Project.

As she approaches 40, Levy-Pounds said she has reflected on the work she wants to do in Minnesota, and decided it's time to take her work "to a new level."

Nekima Levy-Pounds, head of the Minneapolis NAACP, has announced she's leaving her professorship at the University of St. Thomas law school to pursue full-time work as an advocate for racial and economic justice.

Her last day at St. Thomas, where she has taught for 13 years, will be July 31. She is the founding director of its Community Justice Project, a civil rights legal clinic. Students involved in the clinic successfully pushed the Minneapolis City Council to repeal ordinances banning lurking and spitting.

How a mother, attorney, and occasional rapper named Nekima Levy-Pounds became one of the most prominent and divisive civil rights leaders in the state.

Prof. Levy-Pounds will be delivering the opening keynote at Leading Courageously for Racial Equity Conference in Minnesota State University, Mankato. The speech will focus on re-imagining public education.

The head of the Minneapolis NAACP [Prof. Levy-Pounds] on Monday called on authorities to reopen the Jamar Clark police shooting case and appoint a special prosecutor to lead the investigation.

The demand for a new probe came as the woman who was injured the night Clark was shot by police said she was not Clark's girlfriend, that he never hit her that night and that the prosecutor's narrative that justified Clark's shooting by Minneapolis police was fabricated.

Mark Osler, a University of St. Thomas law professor who was a former federal prosecutor in Detroit, said much of the evidence federal investigators are analyzing is likely to be similar to what was shared by Freeman on Wednesday.

But Heffelfinger said any federal criminal civil rights case must look well beyond what happened during the 61-second interaction between the officers and Clark.

After Mr. Clark’s shooting on Nov. 15, protests disrupted Minneapolis for weeks. Demonstrators occupied the area outside a police station, marched downtown and raised questions about racial disparities in Minnesota. The demonstrators sometimes clashed with officers, and one night, the police said, several men who were not part of the demonstration came and shot five people during a protest.

After Wednesday’s announcement, protesters gathered at the courthouse, exchanging hugs, crying and vowing to return to the streets.

Mr. Clark was fatally shot in a confrontation with the police on Nov. 15. Credit Javille Burns, via Associated Press

“An injustice has been done today,” said Nekima Levy-Pounds, the president of the Minneapolis chapter of the N.A.A.C.P. “I believe they lie to us. I believe they tamper with evidence.”

Minneapolis NAACP head Nekima Levy-Pounds and other testifiers who opposed the bill said it didn’t matter that the state would operate the facility — it was still doing business with a private prison vendor.

Levy-Pounds also added that it seemed strange that unemployment was being debated in “a small, white rural town with an 8 percent unemployment rate,” but not in poor, inner-city minority communities — where unemployment rates are much higher, and extreme economic disparities “are fueling our incarceration rate.”

“Our community is in a great deal of pain as a result of the shooting of Jamar Clark at the hands of the Minneapolis Police Department,” Nekima Levy-Pounds, president of the NAACP Minneapolis, said in a statement. “It’s imperative that we demand accountability and transparency, which includes being able to gain access to the video footage of this tragic incident.”

The NAACP and the ACLU say the release of the tapes is required under the Minnesota Data Practices Act, adding that the state of Minnesota opened the door to releasing the tapes when they showed at least one to Gov. Mark Dayton.

The NAACP says a lack of trust in the system is why they are taking the fight to court.

“We have a high level of distrust for how the system functions, and part of that has to do with the fact the Bureau of Criminal Apprehension has a very poor track record – abysmal, in fact — of holding officers accountable for shooting civilians,” said Nekima Levy- Pounds, the president of the Minneapolis NAACP.

December 9, 2015
Within hours, a woman at the 4th Precinct protest took up a bullhorn and denounced "that press conference that Mayor Hodges did with the old guard leadership."
Read More

December 9, 2015
Leaders of the weekslong protest outside Minneapolis’ Fourth Precinct police station returned there Tuesday afternoon to call on officials to remove the barricades they had put up around the station — and to do more to help the city’s North Side.
Read More

Dr. Artika Tyner, assistant professor of public policy and leadership in the College of Education, Leadership and Counseling, has been named interim officer for diversity and inclusion. Tyner will take up the work begun by Dr. Calvin Hill earlier this year while a search for a permanent vice president of diversity and inclusion is conducted.