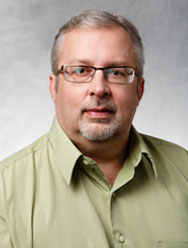 Eric Tornoe has a history of merging art with technology, starting in High School when he figured out how to print letters on the punched paper tape used for storing programs run on a TIES mainframe. While he was earning his BA in Film Production at San Francisco State University he used a Commodore 64 to write papers and create music and 2D digital art and discovered 3D animation with the advent of the Commodore Amiga. Eric started his journey at St. Thomas by completing a Certificate in Information Systems from Graduate Programs in Software. He then accepted a position supporting Instructional Support Services and the Center for Multimedia Development. These departments were early advocates and practitioners of emerging technology at St. Thomas, including the creation of our first public online presence using this strange new thing called the World Wide Web. He next moved to the Operations side of the house as a Server Administrator and implemented many core campus systems including Active Directory, which unified campus identity and access management and still underlies the current system. Eric then became Operations Manager, supervising the Security, Database and Unix administration teams and also serving as Enterprise Architect, providing a unifying vision of campus technology to the various technical teams. Currently Eric serves as Associate Director of Research Computing with STELAR, and has recently taken on Emerging Technology for the group. Encompassing the areas of Cluster Computing, Data Science, Internet of Things, Virtual Reality, Augmented Reality, 3D printing and many other wondrous things, combining art and technology has moved to the fore once again. He is very excited to be working with STELAR and is constantly amazed at how far things have come and how far they have to go!