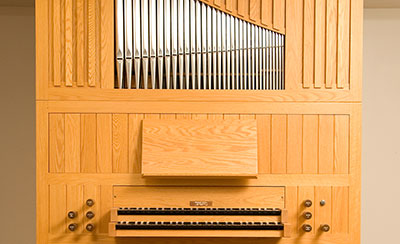 Founded in 1879, Casavant Frères is one of the best-known and most respected pipe organ builders in the world. The small pipe organ residing in Brady Education Center is designed for student use as practice instrument. The two manuals, full pedal, and seven stops provide considerable flexibility for learning a wide repertoire of organ literature. The mechanical action delivers a light and responsive touch for development of good organ technique. 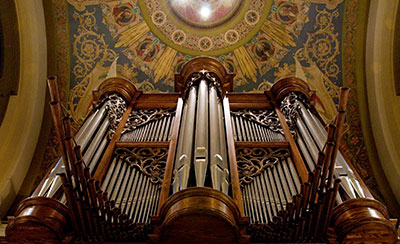 The large pipe organ in the Chapel of St. Thomas Aquinas was built by Gabriel Kney of London Ontario. The organ, housed in a classic Werkprinzip case, is a three-manual, mechanical action instrument with 41 stops of 56 ranks, with a total of 2787 pipes. The manual compass is 58 notes, and the pedal compass is 32 notes. The case is of red oak, the basswood pipe shades and grill over the Swell shutters were carved by Gabriel Kney based on motifs in the paintings on the ceiling of the chapel. The organ was installed in July, 1987, thanks to a generous donation by Robert S. Asmuth, an alumnus of St. Thomas. Hans Fagius played the dedicatory recital on September 20, 1987. 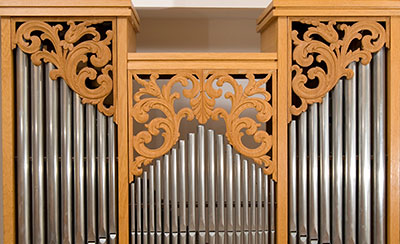 The simple one-manual, five-stop mechanical action organ in the chapel at St. John Vianney Seminary, originally resided in St. Mary’s Chapel. It was given to St. John Vianney in 2000 when the Noack organ arrived. Dutch-born Jan Van Daalen founded Van Daalen Organbuilding in Minneapolis in 1969.

Complementing the visual beauty of the Law School chapel’s award-winning design, the Van Daalen pipe organ supports the music for daily worship for the Law School community. The 33-stop, 8 rank instrument, Van Daalen Opus 5302, was built for a private residence in 1976. It later came to Oak Grove Lutheran Church, Golden Valley, before being moved to the chapel in the summer of 2019. 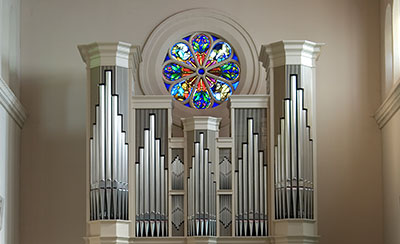 The worship in St. Mary’s Chapel at the Saint Paul Seminary is served by a two-manual mechanical action organ by Noack Organ Co. of Georgetown MA. Installed in April of 2000, the instrument has 22 stops of 29 ranks, with a total of 3125 pipes. The painted case with simple, delicate pipe shades and swell grill, and white oak key desk, graces the front of the stunning renovation of the chapel by the late Brother Frank Kacmarick. Wedge bellows provide slightly flexible wind, and the unequal temperament (Valotti) renders the simple keys more pleasant than in equal temperament.