Should Justice or Agape Love Be the Organizing Principle of Civil Law? 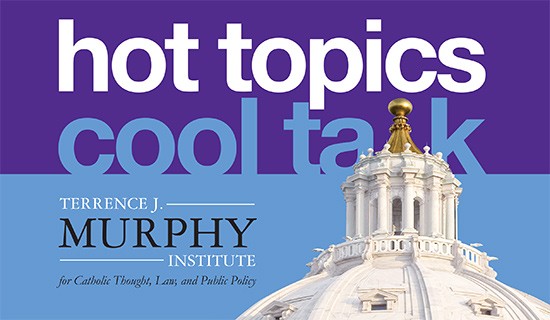 Free and open to the public. Lunch is complimentary, but reservations are required.

Justice vs. Love.  It's an intra-Christian debate about the proper framework for thinking about the purpose of law.  The answer has potential implications for the full range of things that law does, including criminal punishment, immigration, social welfare, and zoning.

Does separating justice and agape love undercut the role law can have in promoting human flourishing, risk privatizing Christian ethics, and eliminate any distinctive contribution Christian ethics might make to political thought?

Does making agape love the measure of justice risk conflating the church's gospel proclamation with the secular state's role of ordering civil affairs, and thus improperly expand the latter's power?

Join the Murphy Institute when expert speakers Robert F. Cochran Jr. and David VanDrunen wrestle with these questions and more during the first Hot Topics: Cool Talk program of the 2014-2015 academic year. Thomas Berg will be our moderator.

Free and open to the public. 1.0 Ethics CLE credit available.

David VanDrunen, (Ph.D., Loyola University Chicago; J.D., Northwestern University) is Robert B. Strimple Professor of Systematic Theology and Christian Ethics at Westminster Seminary California. A minister of the Orthodox Presbyterian Church and an attorney, his books include Natural Law and the Two Kingdoms: A Study in the Development of Reformed Social Thought (Eerdmans, 2010), and Bioethics and the Christian Life: A Guide to Making Difficult Decisions (Crossway, 2009).