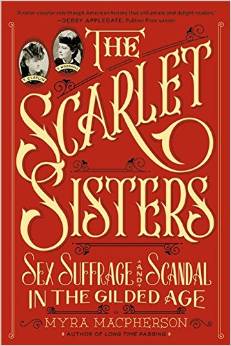 The June book club will be facilitated by Dr. Nancy Zingale and Dr. Young-ok An.

A fresh look at the life and times of Victoria Woodhull and Tennie Claflin, two sisters whose radical views threatened the white male power structure of the nineteenth century and shocked the world. In 1870 Woodhull and Claflin became the first women to open a brokerage firm, not to be repeated for nearly a century. A half-century before women could vote, Woodhull used her Wall Street fame to become the first woman to run for president, choosing former slave Frederick Douglass as her running mate. She was also the first woman to address a United States congressional committee. Claflin ran for Congress and shocked the world by becoming the honorary colonel of a black regiment. They were the first female publishers of a radical weekly, and the first to print Karl Marx’s Communist Manifesto in America. Award-winning author Myra MacPherson deconstructs and lays bare the manners and mores of Victorian America, remarkably illuminating the struggle for equality that women are still fighting today through the story of these inspiring and outrageous sisters.

The book club titles for this year’s book club have been purchased and loaded on the UST libraries’ Kindles.   The Kindles are available for checkout from the OSF Library on the main campus for UST students, faculty and staff for a period of 3 weeks.  You can find additional information regarding the Kindles and a comprehensive title list here or on the library’s website.