The Luann Dummer Center for Women is delighted to host a reception with Irish poet Paula Meehan, who is the recipient of 2015 O'Shaughnessy Poetry Award of UST. 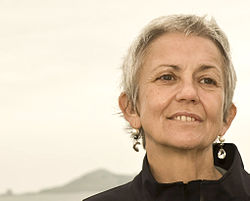 In 2013, Ireland's President Michael D. Higgins appointed Meehan Ireland Professor Poetry at Trinity College, cementing her reputation as "informal Poet Laureate" <http://www.irishtimes.com/culture/paula-meehan-named-ireland-professor-of-poetry-1.1526752>. The poet and playwright is the second woman to be awarded the prestigious post, set up in 1998 after the late Seamus Heaney won the Nobel prize for literature.

Paula Meehan (1955-   ) was born and raised in working-class area of Dublin and graduated from Trinity College and Eastern Washington University. Among her numerous books of poetry are Return and No Blame (1984), Mysteries of the Home (1996), and Painting Rain (2009); her plays include Kirkle (1995), Cell (1999), The Wolf of Winter (2003), and Music for Dogs (2009). Meehan's work is much translated and has garnered many prizes. She has conducted workshops with many inner-city communities and prisons as well as universities. She lives in Dublin.

“To say that Paula Meehan’s work is informed by the facts she is of working-class origin, a woman, and has integrated into her imagination the folklore and dream consciousness of her forebears would be unfairly reductive and yet it would be misleading not to refer to them at all. Her work has won plaudits from critics and prize-givers at the same time as it has attracted a wide following from non-poetry specialist readers. There is an erotic charge to much of Meehan’s work which, to borrow a phrase from Eavan Boland, lays beneath the surface of conventional sexuality like a reef below water. Her poems are sensual both in her handling of ideas and in her handling of the words which convey those ideas.” – Patrick Cotter, Irish Poet