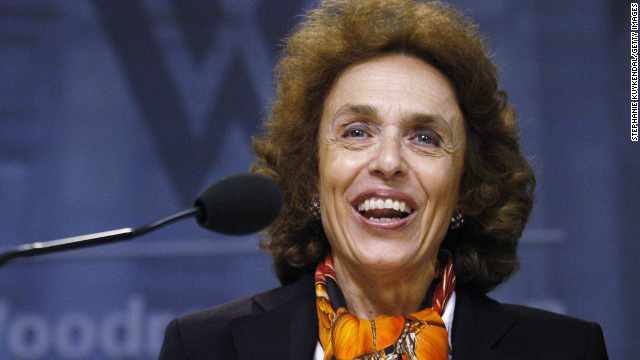 As a longtime expert on Iranian politics and a prominent scholar and public intellectual, Dr. Esfandiari is an outspoken advocate for human rights and women's rights.

Dr. Esfandiari is currently the Director of the Middle East Program at the Woodrow Wilson International Center for Scholars. Dr. Esfandiari has taught Persian language and contemporary Persian literature, and courses on the women's movement in Iran, at both Oxford and Princeton universities. She has served as Deputy Secretary General of the Women's Organization in Iran and as the Deputy Director of a cultural foundation there. She also worked as a journalist and taught at the College of Mass Communication in Tehran.

Dr. Esfandiari is the author of Reconstructed Lives: Women and Iran's Islamic Revolution (1997), editor of Iranian Women: Past, Present and Future (1977), the co-editor of TheEconomic Dimensions of Middle Eastern History (1990), and of the multi-volume memoirs of the famed Iranian scholar, Ghassem Ghani. Among her other writings are chapters in various books: In the Eye of the Storm: Women in Post-Revolutionary Iran (1992), Iran at the Crossroads (2001), Middle Eastern Women on the Move (2003) and Islam and Democracy in the Middle East (2003). Her articles have also appeared in Foreign Policy, Journal of Democracy, Princeton Papers in Near Eastern Studies,The New Republic, and Middle East Review. She is the co-author of Best Practices: Progressive Family Laws in Muslim Countries(2005), a Woodrow Wilson Center and RAND Corporation publication; “Why 'Soft' Power in Iran Is Counterproductive” (October 8, 2007) and “Iran Closes an Iconic Magazine” (April 11, 2008), both in The Chronicle of Higher Education. Dr. Esfandiari has also written and edited numberous articles on women and gender issues in other countries such as Iraq, Pakistan, Lebanan, and Nigeria.

Dr. Esfandiari was imprisoned by Iranian authorities in 2007. She spent eight months under country arrest, nearly four months of them in solitary confinement. Her memoir of the ordeal, My Prison, My Home (2010), is a portrayal of strength, survival, and love of country. Copies of the book will be available for purchase at the book-signing after her lecture.

The LDCW Book Club will be discussing My Prison, My Home in preparation for her lecture.  Meetings will take place in the Center and dates for those discussions are:

Following Esfandiari's lecture, a brief reception and book signing will be held in the lobby outside of the auditorium.  Copies of My Prison, My Home will be available for purchase.

The Luann Dummer Lecture Series features a distinguished woman speaker each March, Women's History Month.  Established in 1994 through a gift from the estate of Dr. Luann Dummer, the lecture series is open to the St. Thomas community and the public.